Are you a lawyer or a judge? Or do you just seek a writing muse? Look no further than Justice Elena Kagan’s majority opinion in Fry v. Napoleon Community Schools. Writing for a near-unanimous court, Kagan bolstered the right to special-education accommodations, in this case a service Goldendoodle named Wonder, for a young girl with cerebral palsy.[1]

On my new editing software BriefCatch, Kagan’s opinion scores a whopping 100/100 in Flow, 100/100 in Punchiness, and 93/100 in Plain English. (Not a big surprise, given that she’s one of the rock-star writers I used to calibrate the maximum scores.)

How does Kagan win a perfect 100 Punchiness Score? More than almost any other legal writer today, she shuns wordy or legalistic language and favors its tight, modern equivalent. So not “pursuant to Title II” but “under Title II.” Not “therefore” but “so.” Not “foregoing” but “above.” Not “despite the fact that” but “even though.” Not “agreement regarding” but “agreement about.” Not “prior to” but “before.” Not “further believe” but “also believe.” Not “concurrently” but “at the same time.” And not “subsequently filed” but “then filed.” 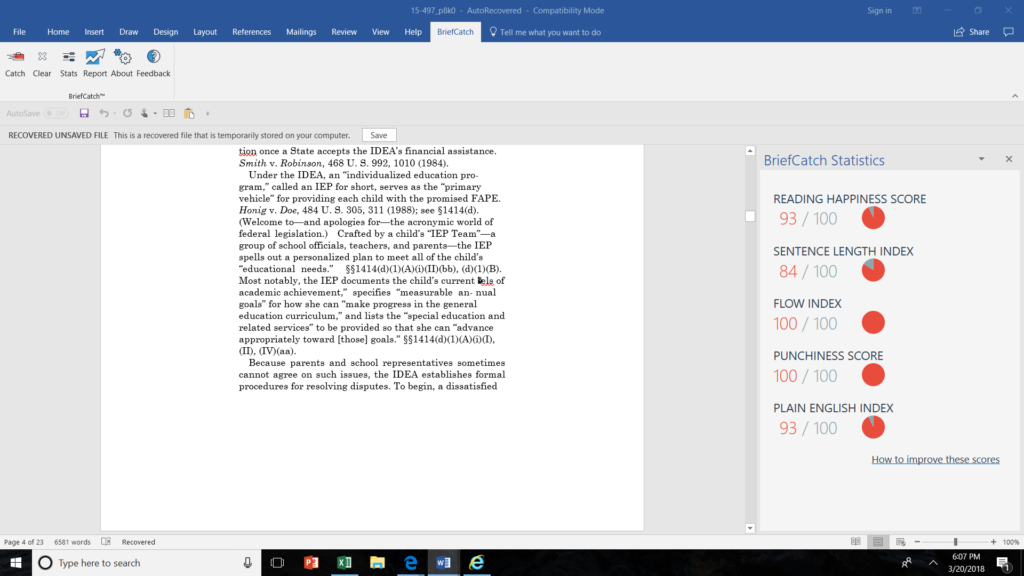 And both statutes authorize individuals . . .

How is a court to tell when a plaintiff “seeks” relief for the denial of a FAPE and when she does not?

During a recent interview with the new Dean of Harvard Law School, Kagan explains that when she writes an opinion, she tries to re-create what she used to do when she prepared to teach a law school class: imagining a smart audience that doesn’t know much about the topic.[2] It shows. In ways large and small, Kagan acknowledges her readers and even addresses them directly and conversationally.

Important as the IDEA is for children with disabilities, it is not the only federal statute protecting their interests.

and explaining a legal term there:

What matters is the crux—or, in legal-speak, the gravamen—of the plaintiff’s complaint, setting aside any attempts at artful pleading.

As another way of empathizing with the reader, Kagan apologizes for annoyances like bureaucratic acronyms:

and even for needing to repeat herself:

We begin, as always, with the statutory language at issue, which (at risk of repetition) compels exhaustion when . . .

Using the second-person imperative, Kagan also invites the reader into her world by using provocative examples:

Take two contrasting examples. Suppose first that a wheelchair-bound child sues his school for discrimination under Title II (again, without mentioning the denial of a FAPE) because the building lacks access ramps.

What readers do you imagine when you write? 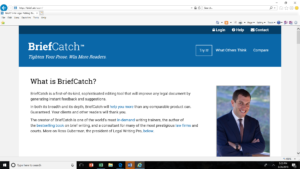 In its natural form, legal writing can sound like a dirge. Yet Kagan does what she can to spin a melody with a beat instead.

Start with some short sentences:

And that is all.

Congress was quick to respond.

So too here. (Was she trying to get Chief Justice Roberts’s vote with that phrase?)

the difficulty of transplanting the complaint

those statutes aim to root out disability-based discrimination

But that examination should consider substance, not surface.

That principal purpose then becomes the Act’s principal command.

Use punctuation strategically, especially the dash, the colon, the semicolon, and question mark:

Title II forbids any “public entity” from discriminating based on disability; Section 504 applies the same prohibition to any federally funded “program or activity.”

But can anyone imagine the student making the same claim against a public theater or library? Or, similarly, imagine an adult visitor or employee suing the school to obtain a math tutorial?

On that understanding of § 1415( l), the Sixth Circuit held, the Frys’ suit could not proceed: Because the harms to E. F. were generally “educational”—most notably, the court reasoned, because “Wonder’s absence hurt her sense of independence and social confidence at school”—the Frys . . .

And vary your sentence structure by sharing the source of some of your points in the middle of your sentences rather than rigidly up front or in the rear:

And that means, the court continued, that exhaustion is necessary whenever . . .

An eligible child, as this Court has explained, acquires a “substantive right” to such an education once a State accepts the IDEA’s financial assistance.

And such relief is “available,” as we recently explained, when it is “accessible or may be obtained.”

But do you know what transitions you won’t find in her opinion? “Additionally,” “Moreover,” or “Consequently.” Nor will you find “However” at the start of a sentence. She avoids these heavy transitional devices by design.

In their place, you will find loads of light, varied, and logically interesting transitions:

She also uses signposts like “first” and “next” to help guide the reader.

And she uses many bridge transitions that link the start of one sentence to the point of the sentence before:

That inquiry immediately reveals the primacy of . . .

That principal purpose then becomes . . .

How many of those transitional devices do you use with abandon?

I admit that “Let’s talk about explanatory parentheticals!” is not one of the top applause-getters in my workshops. As the years go by, though, I’ve found that more and more lawyers and judges have strayed from First Parenthetical Principles, putting random thoughts about a case between a pair of parentheses and calling it a day.

I wish everyone would follow Justice Kagan’s lead instead, starting non-quotation parentheticals with a participle that reflects something that courts do rather than something about the parties or about the case itself:

See 788 F.3d at 631 (acknowledging that the Frys do not “state that Wonder enhances E.F.’s educational opportunities”).

It’s perhaps fitting that I end with explanatory parentheticals, which demand just skill and care. Kagan likes baseball—and she’s showing us here that legal writing is more like a sport than many people realize. Great legal writing, she suggests, is about performing a discrete number of tasks confidently and consistently. That hardly means it’s easy. But it does mean that it’s more science than art.

[1] This isn’t my first “Five Ways” article featuring a dog, incidentally. In a blockbuster brief that Chief Justice Roberts wrote in practice, he famously mentioned an “Irish Setter who often flew shotgun” and who inspired the name of the party he was advocating for, an accused polluter called the Red Dog Mine. Seemingly unrelated details about the dog and the mine, as I’ve pointed out, helped frame Roberts’s legal theory.

For Kagan, by contrast, the dog named Wonder was an essential part of the case. What’s impressive is how she shares choice details juxtaposing the faithful Goldendoodle with bureaucratic school officials. In doing so, she elicits the reader’s sympathies for Wonder and, by extension, the kindergartner who loves him: Wonder “help[s E. F.] to live as independently as possible.” He does so by “retrieving dropped items, helping her balance when she uses her walker, opening and closing doors, turning on and off lights, helping her take off her coat, [and] helping her transfer to and from the toilet.” Even when officials “briefly allowed” Wonder to accompany the girl to school, “the dog was required to remain in the back of the room during classes, and was forbidden from assisting [E. F.] with many tasks he had been specifically trained to do.” In my Point Taken, I discuss how judges, like lawyers, often telegraph their legal analysis based on which facts they emphasize and de-emphasize, and how. It’s hard to play that card better than Kagan has here.

[3] I admit that I’m not sold on her unusual use of “More” as a transition: “The complaint contains no allegation about the denial of a FAPE or about any deficiency in E.F.’s IEP. More, it does not accuse . . . ”