Here’s to finessing our writing in 2018! To show that we can all improve, I uploaded to BriefCatch a motion for Facebook filed by two litigation partners who are former Supreme Court clerks (for Alito and Thomas). You’ll see some of what BriefCatch flagged below. 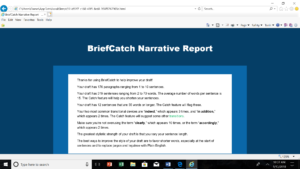 Applying these well-established principles to the facts of this case, it is beyond doubt that § 230 requires this Court (cut and start with “Section 230 thus”)

It is blackletter law that a plaintiff seeking to recover (cut)

It is well-established that, to form the basis of (cut)

2. Cut references to your own case

Mr. Zuckerberg, a named codefendant in this case, is the founder

Plaintiff filed his initial complaint in this case on March 31, 2011

That clause is clearly enforceable

By the terms of the amended complaint (try “Under”)

possibility that such harm might materialize in the future is not, as a matter of law, sufficient to satisfy the damages element (try “cannot,” and, in general, don’t be too quick to write “as a matter of law”)

7. Don’t set the bar higher than need be

See, e.g., Carafano v. Metrosplash.com, Inc., 339 F.3d 1119, 1123-1124 (9th Cir. 2003) (Matchmaker.com provides interactive computer services because it allows users to post information on a profile page and share that information with others) (add “finding that” or “holding that” and focus on the takeaway for Facebook, not on Matchmaker)

Needless to say, a threat to cause bodily harm at a point in time six weeks in the future (try “six weeks later,” and consider cutting “Needless to say” as well)

As you can see, even the best lawyers and best writers miss these edits in their final drafts. Want to edit better while saving time? Try BriefCatch today.